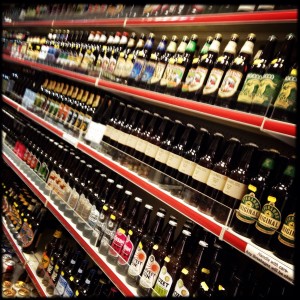 A few months ago someone I know who distributes wines and spirits told me I should check out a little shop in Syston, a small town to the north of Leicester.
I kept meaning to but somehow never got around to it.
Then in the new year, I was contacted by the owner of the shop who asked if I’d be interested in visiting his shop to see his new range of beer.
We spoke a bit by email and Twitter and yesterday, having been sent a list of beer that the shop now stocks, I drove over to Metro Wines to meet Vikram and to stand and gaze at what he has decided to do.
You see, what he’s decided to do is this.
Metro Wines is a specialist whisky seller – there are some amazing malts in the shop. More than I thought existed, and some of them super expensive – who also do wine for corporate events and weddings and the like, and Vikram has decided that he is going to try and get his customers drinking Really Good Beer. 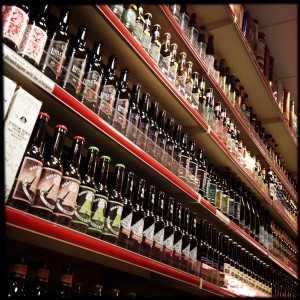 And so he has added to his range of local breweries with shelves full of beer from The Kernel and Brew By Numbers, Thornbridge and Beavertown, Partizan and Tiny Rebel, Buxton Brewery, Tempest and Weird Beard, to name just a few.
His aim is to get five hundred beers in his shop and to have Metro Wines become a new must visit store for anyone who loves their beer.
And I think he’ll make it just that.
You see, Vikram is a very nice chap, passionate about his malt whiskies, he’s keen to learn about beer and is warm and welcoming, happy to spend time chatting, getting to know people and advising them on what they want and what he can offer.
I know full well that there’s another beer shop in Leicester, but competition is good and there will always be something in one shop that’s not in the other.
So if you live in Leicestershire pay a visit to Metro Wines in Syston, you’ll like what you find. 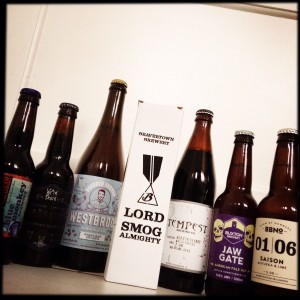 I’m very pleased with my haul.