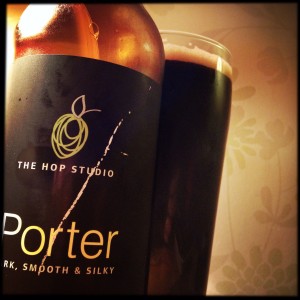 In all honesty I wasn’t expecting this to be just as good as it is.
Hop Studio’s Porter pours a deep purple brown and smells rich and earthy and full of morello cherry and chocolate.
In fact that’s a good starting point for the flavour too.
From the first mouthful you get a really good mouth coating chocolate flavour, some burned wholemeal toast, a little tobacco smoke, treacle and vanilla.
There’s a lightly bitter and semi sweet maple syrup and dandelion leaf hop that gives some much needed sharpness to the finish, but this is all about the luxurious chewy chocolate that makes this Porter really very enjoyable.