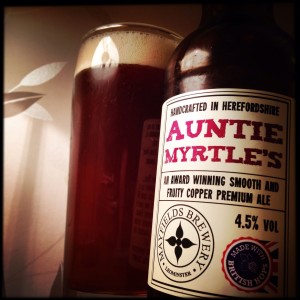 Fuggles is often derided in beer geek circles, occasionally by me, but I think it’s more to do with the fact that it signifies the boring old guard of Real Ale drinking than the way it tastes.
And I think it’s time for me and other beer geek types to move on, and if we find a beer we like that uses Fuggles we should just say so without any excuse-making or self serving cynical humour.
So I am going to start right now.
Auntie Myrtle’s uses Fuggles in abundance which gives this Best Bitter – or, “Copper Premium Ale,” as the label states – a lightly spiced, nettle tea and Dandelion & Burdock bitter sweetness that’s resinous and woody, herbal and spiky and more to the point, really rather good.
It’s complemented by a sticky toffee apple and breadcrumb malting which gives a pleasing body and the aroma is spiced honey.
All in all, is a very well made and rather tasty traditional tasting Best Bitter, and I Like it very much indeed.