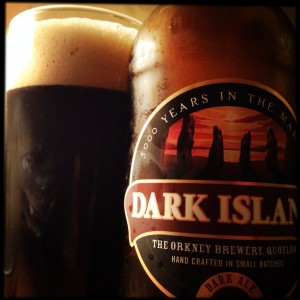 There’s a weird dusty aftertaste to this beer.
It’s not the best beer in the world to start with, though it promises good things as it pours a nice purple brown with a big creamy head.
Dark Island’s smell is raisins and, well, more raisins, and as you take a swig there’s a slight sourness to the plum and sweet biscuit malt.
There are probably some hops in here, but I can’t really spot them and with every mouthful the weird sandy dustiness builds, along with the bitter sourness.
How can I best describe it?
Like licking the jacket of a beer book that’s been on a shelf for far too long.
Pretentious maybe, but accurate too.