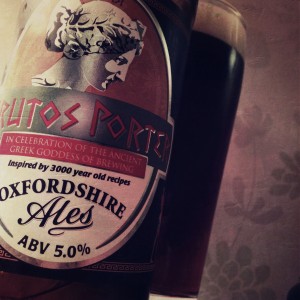 Cynical I might be, but I feel a little incredulous towards a statement like, “Inspired by 3,000 year old recipes.”
And so ignoring this statement, I’ll just talk about the beer.
It’s alright.
Not brilliant, but alright.
It’s a little see-through for a Porter, pouring a deep chestnut red, and it struggles to have any aroma at all.
There’s some treacle and biscuits from the malt, dry and crumbly they’re, well, alright.
And the hops are hedgerow bark, a little green and snappy and a little brown and crunchy.
So all in all a beer that’s alright.
But I’m sorry, I have to ask, three thousand year old recipes?
Alright?