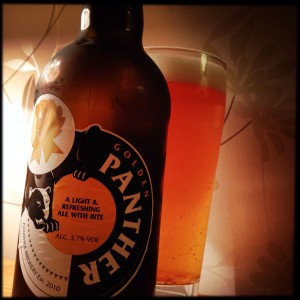 This is a well made Golden Ale, and that’s just about all I need to say.
Think of any Golden Ale that you enjoy drinking and how it tastes, and that’s what this is.
Honey, biscuits, a light bitterness, you know the score.
Golden Panther does exactly what you would hope and expect and it does it well, and sadly this evening it suffers from my utter boredom with Golden Ales.
I’ve even begun to hate the word Ale, let alone anything Golden, it’s certainly a word I don’t say out loud, I’d rather say Beer.