Recently I was blown away by a young brewery from London.
Again!
I was blown away by the branding and by the name, but most of all I was blown away by the beer that I tried.
That brewery is Brew By Numbers, and I was so blown away that I felt the urge to get in touch with them and have a chat.
In doing so, and having had a discussion with David from EeBria about the brewery, I thought it might be a nice idea to run a competition so that not only could you read my thoughts on the beer and find out about the brewery, you could have the chance to try them for yourself and see if you agreed with me.
And so here’s my little interview and a bunch of reviews.
The competition is at the bottom and is open to everyone.

Hello, please introduce yourselves.
Hi. Tom and Dave here, the founders of Brew By Numbers. From our archway in Bermondsey we brew a wide range of beers, taking inspiration from around the world, with a heavy influence from Belgium.
Our aim is to create high quality, drinkable beers. 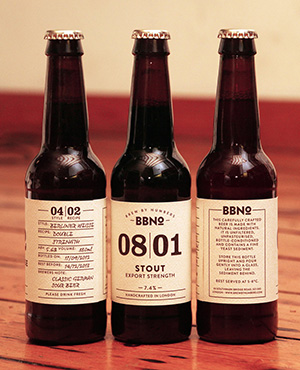 Why call yourselves Brew By Numbers?
Since the very beginning we used numbers to catalogue our homebrew batches. From an early stage we would split these batches to test different ingredients and processes. We gave these experiments a second set of numbers to differentiate them from the base beer.
The numbering system we use today is an evolution of that original cataloguing system; the first two digits became the style category, and the second two became the recipe within that style.
From the customer’s point of view, having large, distinct numbers on our bottles means they can recognise our beers easily, and once they’re familiar with the scheme they can just as easily identify which beers they know and which they‘re yet to try.  The name Brew By Numbers, or BBNo. for short, is a name that links to this numbering scheme.

Have you always been brewers?
Neither of us had done any brewing before 2010. Dave did some very basic extract homebrew during a winter season in New Zealand, and around the same time Tom was helping out at the Kernel Brewery.
In July 2011, committed to opening our own microbrewery, we secured the use of a friend’s basement on Southwark Bridge Road.  We built a simple homebrew kit and with the help of friends in the industry – and a lot of internet research – taught ourselves to brew.
We split our hours between work, building the business plan and developing our recipes, until May 2013 when we moved into our current location on Enid Street, quit our jobs and became full time brewers.
We recently expanded our team to include Steve Gray of Massive Brewery and London Brewing Co. fame. 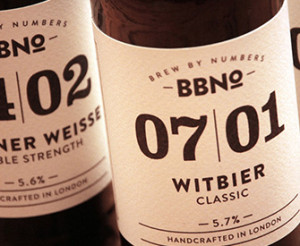 What kit do you use?
With the recent flourish of microbreweries in the UK the demand for and cost of used brewhouses is high.  We were faced with two options: spend a lot on a small, second-hand brewhouse, or create our own.  The choice was easy, so inspired by the craft breweries of Australia and New Zealand – where brewery-specific equipment is scarce – we decided to convert used stainless soft drink and dairy vessels to create our own bespoke brewhouse.
Our brewhouse has one of the smallest footprints of any 20hl brewery in the UK, with a gravity fed whirlpool allowing us to use hop pellets in the boil for maximum flavour extraction. The cladding and banding were all done by hand, in-house, with the help of some volunteers.

What are your plans for the future?
Now that our 20hl kit is up and running, we plan to revisit some of our previous recipes, as well as developing new ones.
Experimentation has always been a mainstay of our approach to brewing. Having our 20hl kit means we can go back to using our original 160ltr pilot kit for more experimental beers, including some historical brews which have become rare or even extinct.  The best of these will be brewed on the 20hl kit.
Barrel ageing beers is of particular interest to us. We’ve already aged a couple of batches, but we want to expand our barrel ageing project over the coming months.
Also, it’s been a while since we’ve had the chance to brew any sour beers, something we wish to do as soon as possible. Judging by the number of requests we’ve had it’s clearly a feeling that’s shared by our customers as well.
And finally, of course, we want to continue to learn and improve.

Here’s what I thought of the current batch of beers: 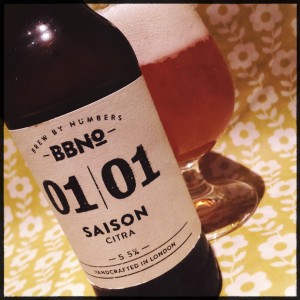 01|01 Saison Citra (5.5%)
What a beer this is.
Pouring a light golden straw with a big boisterous head, the smell is yeasty lemon pith and a hint of Wotsits.
There’s an earthy yeastiness in the body of this beer too, underscoring the honey and shortcake of the malts and adding to the peppery spice that’s been added to the brew.
The Citra is packed tightly into this beer, and as you drink it stands up tall and sings.
Shiny, zesty, fresh lemon rind wrapped in daisies and dandelions, it makes the beer pop and crackle on your tongue and leaves you with a long sharp, dry and super bitter finish. 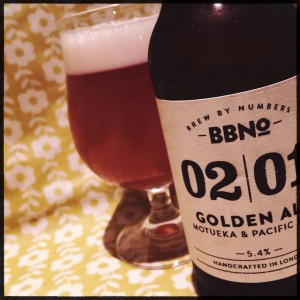 02|01 Golden Ale Motueka & Pacific Jade (5.4%)
This is so good it’s almost making fun of what Golden Ales are.
The smell is honey and tropical fruit, and the beer pours a shining gold with a big foamy head.
This is a fruity beer, tropical rather than orchard, with a malt that’s thick and sticky caramel, freshly baked filo pastry and white pepper that provides a superb platform on which the Motueka and Pacific Jade hops give you mandarin and mango, kiwi, lime and Peach Melba sprinkled with sherbet and wrapped rice paper.
The finish is snappy and bitter and delicious. 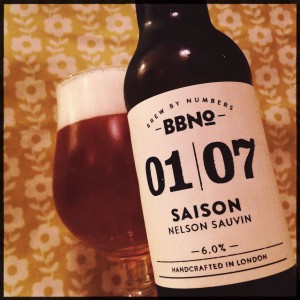 01|07 Saison Nelson Sauvin (6%)
So far I’ve found Brew By Numbers beer hard to fault.
01|07 is a gooseberry and green grape fuelled dream.
With a similar aroma to 01|01, though lacking the Wotsits, the smell is fresh and very appetising.
The malts are soft and squidgy, all honey and brioche, buttery and sweet and lovely.
The Nelson Sauvin do what they do, hitting you with their New Zealand White Wine experience, all gooseberries and grape skins, hazelnuts and a hint of green tobacco that gives a piquant spicy pepper and leaves a finish that’s warm and spiky, bitter and dry. 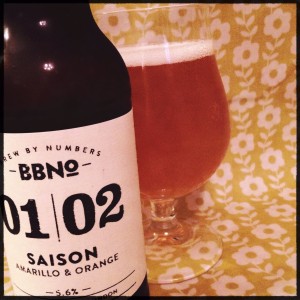 01|02 Saison Amarillo & Orange (5.6%)
An exquisite metallic yeast burns on your tongue as you dissolve into this wonderful light straw coloured Saison.
There’s a hint of mushroom and a teasing glimpse of damp farmyard, almost Lambic but not quite.
The orange peel is fresh and bright and, well, orangey.
As a boy I would love eating orange skins and would take them apart globular ball by globular ball, and here I taste all that again, along with some super tobacco and lemon juice from the Amarillo hops that swagger around over the lovely light honey and shortcake of the malts.
Lovely. 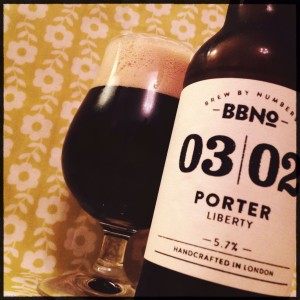 03|02 Porter Liberty (5.7%)
This deep dark purple brown Porter with its big creamy head smells of vanilla and chocolate and prunes.
The malts are heavy with black coffee, sweet creamy chocolate and the vanilla pods that you smelled as you poured.
There are a lot of hops in here too, almost enough to have you asking if this might be a Black IPA.
Liberty and Zeus join forces to provide a sharp nettle sting and mandarin flesh hoppiness, fizzing with life and packed with wood resin and garden flowers.
The finish is bitter, honey rich and dry, and continues to remind you that there’s a lot of vanilla going on in here. 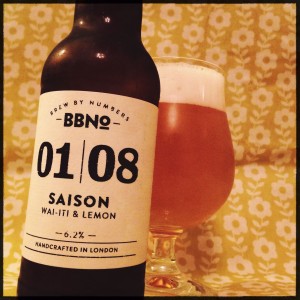 01|08 Saison Wai-Iti & Lemon (6.2%)
This is a new hop on me and it’s an intense little number.
Both the smell and the flavour is a very strong mandarin and lemon, which in this beer is made more intense by the addition of fresh lemon zest.
There’s also a lovely woody and meaty yeast that rises up from your glass and tickles the back of your throat.
The malting is brown sugar and shortcake, it’s runny honey sticky too, and it balances the sharp and spiky hops beautifully.
Brew By Numbers really have got this British Saison thing nailed.

Thanks to Tom and Dave for taking their time to talk to me about their brewery.

In order to take part simply email your answer to the question below to hq at camrgb dot org
Please also state if you would like to be added to the EeBria mailing list.

Which brewery, available through EeBria, was voted Britain’s Best New Brewery in 2013 by Rate Beer?

You can also get 15% off a Brew By Numbers order from EeBria until this competition closes.
Simply use the code BrewByNumbers at the checkout.

The competition closes midnight on Sunday March 16th, 2014 when a winner will be chosen at random from all the correct entries.