Posted on February 8, 2014 by Simon Williams 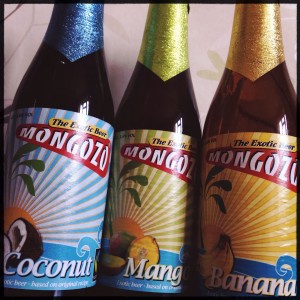 I have just spent a rather unpleasant twenty minutes with three small bottles of beer, after which I had to scour my tongue with wire wool.
Generally I’m the first to say we all taste things differently and that what one person finds good another may hate.
But I can’t find a single positive word to say about the three apocalyptically bad drinks I’ve just poured down the sink.
They’re not even worth writing individual reviews for.
Fruit beer can be fabulous.
It can also be dreadful.
But I could find so little to do with beer in the Mongozo brews, so full of sugar are they that they may as well be alcopops.
The Mango (3.6%) was a teeth-on-edge sugar overdose, the Banana (4.5%) tasted exactly like the medicine my children won’t take even when they’re feeling at death’s door, and the Coconut (3.5%), though the best of a bad bunch, was like that pink coconut ice stuff.
Nice to eat, bad to drink.
The overall feeling from all three beers was a huge sugar rush that turned my stomach.
Yes, we all taste differently, but if you like these beers you’re welcome to them.
I poured all three down the sink and will be happy to never see them again, as they are almost certainly the most terrible beers I have ever tasted.

One Response to Do Fear The Reaper: Mongozo Exotic Beers