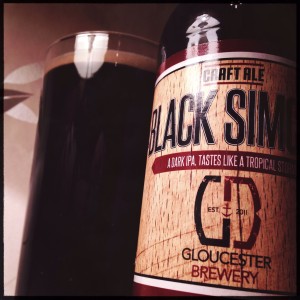 Ooh, I like this a lot.
And one of the reasons I like it as much as I do is perhaps a little bit petty.
You know how so often you find a beer that you really like and it’s in a little 330ml bottle because it’s “Craft” and it’s just not enough and you wish you had more?
Well, Black Simcoe is a full 500ml of deliciousness and that makes it a thing of extra beauty and goodness.
Black Simcoe is, as you may have guessed, a Black IPA brewed with Simcoe (and Galaxy and Mosaic, though from the name you’d think it was a single hopped beer).
It pours an inky black and smells of tropical fruit sweets, coffee and a hint of varnish, ever so slightly sweaty.
Weird I know, but weirdly not unpleasant.
There’s a good woody, honey heavy treacle tart malt, almost Porter but not quite.
And why?
Because the hops scream at you in the most exciting way.
I’m coming around to Simcoe – It’s not been a favourite hop in the past – and here it works beautifully alongside the bittering of the Galaxy and Mosaic.
Bright and shiny, fresh, crisp and immensely bitter, there’s masses of lime zest and grapefruit pith over a mango and kiwi fruit body.
The result is a beer with a finish that’s big and face-slappingly bitter, long and dry.
Very very good indeed.