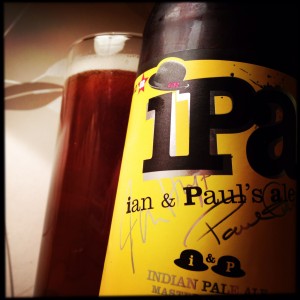 This is quite something.
Growler have managed to brew a beer almost devoid of any flavour whatsoever.
They’ve also managed to remove much of the aroma too.
And so Ian & Paul’s Ale, they’re IPA, smells of a couple of apples off down the road, and tastes of the lightest smear of toffee a slice of apple and the rumour of hops.
I can’t even say that I don’t like it as there’s not enough here to base a decision on.
Bland.