Posted on February 4, 2014 by Simon Williams 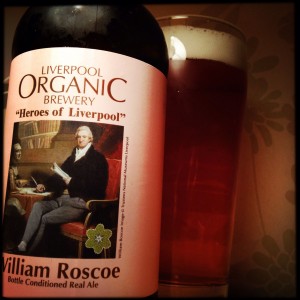 Uh oh, Golden Ale alert!
For fear of boring you and myself, here we go again with another Golden Ale rant.
William Roscoe is a perfectly well made beer, and better than many other Golden Ales that I’ve recently drunk.
I’m just so sick and tired of the light caramel, biscuit and everything else that goes on in this particular style of beer.
Golden Ales are, in my opinion, the most conservative (with both small or large ‘C’) beer style.
Staunchly “the same”, staunchly, self righteously unexciting, they are beginning to become the beery embodiment of everything that frustrated me about a certain organisation that drove me to starting CAMRGB.
So, apologies to Liverpool Organic Brewery for this review, it’s not really a review of you, and this beer really is very well made, the problem is I know I have at least another six Golden Ales waiting to be opened and poured, and I think I might implode*.

*And before anyone points it out, yes I know the Big Wave I recently reviewed is a Golden Ale and I’ve said it’s great. That’s because I’m specifically talking about English Golden Ales with their straw and honey thing, whereas the Kona one had interesting hops (heaven forfend!) and stuff going on in it.