Manchester, So Much To Answer For: A CAMRGB Twissup 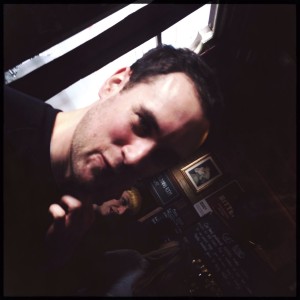 The day began with a lift to Manchester by my friend Chris’ (@titwillars) wife who had been convinced she ought to visit her family close by thus saving us train fare.
We arrived in the city in good time, checked in and then were dropped off at Marble Arch, home of the Marble Brewery, and opened the door to find an already good sized group of people there.
Marble treated us to a couple of bottles of their Anniversary Stout that they had been ageing for a year in boozy barrels and the consensus was that it was good.
Very good.
And very, very strong as an opening drink.
I caught up with lots of people I’d not seen for ages and no sooner had I finished my half of Marble Dobber than we all moved en mass just down the road to the Blackjack Brewery where the brewery had constructed a little brewery tap for us with an honesty box for payment. 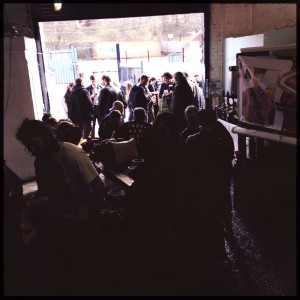 What a brilliant couple of hours we had.
Talking, drinking, talking more, queueing for the one toilet in the place, laughing, drinking and talking.
You get the drift.
During the time we spent there I had, in no particular order a half (or thereabouts) each of the following:

At around four and in desperate need of food, chris and I were led across town by Steve (@pasteyh2g2) and guided to a brilliant little felafel store just down the road from the Twissup’s next destination. 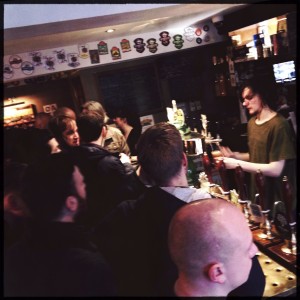 Full of rather yummy felafel we entered Port Street Beer House.
What a great pub.
Friendly staff, knowledgable about their drinks looked slightly alarmed at the amount of CAMRGB Twissup people pouring through the door, as the forty strong army of good natured beer geeks gently wrestled for space at the bar.
While we were here Jay (@misterjk) of Quantum Brewery unleashed his latest brew, a very good and rather fruity Bock at around 7% that did all the right things.
Chris and I found a corner and got down to some serious “trying” of beer while nattering endlessly to various old and new-found friends.
Other beery delights at Port Street included:

Mad Hatter Brewing Hare Of Darkness – A very Marmitey Black IPA.
Brew By Numbers 01|08 Wai-Iti & Lime – Confusing as I thought the numbers were the beer style and recipe and 01|08 is Wai-Iti & Lemon isn’t it?
Six Degrees North Josef Blond – Refreshing and crisp.
Sly Fox Route 113 IPA – From a can and super hoppy.
Brouwerij Verhaeghe Duchesse De Bourgogne – An old favourite that I wanted Chris to try. 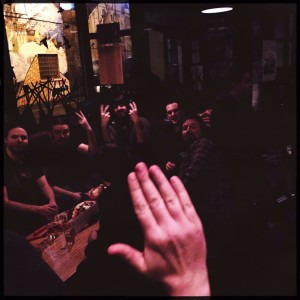 The CAMRGB Crowd are a friendly bunch.

Eventually it was time to move on to venue number four.
A bit of a walk away I was surprised by The Font.
It wasn’t what I was expecting at all.
Until you get to the bar and see the range of quality draft and bottles on offer you might think from first impressions that this is a city centre gang of students hangout.
Noisy, bright, shiny.
Did I say noisy?
However, the beer on offer was superb, and a bunch of tables had been reserved for the Twissup gang.
Along with the beer I ate a rather good, rather large hot dog while talking to, I believe, just about everyone.
It’s why I’m not mentioning names particularly.
I simply can’t remember everybody.
But what I do remember is that they were all ace.
The beer I had at The Font:

Magic Rock Highwire – As good as always.
Redchurch Brewery Hackney Gold – Decent.
Arbor Ales Down Deeperer – Just because it was there and I’d not seen it for ages. I shared it amongst everyone.

On the way to our final destination we diverted for a quick half of Punk in BrewDog.
It looked and smelled like every other BrewDog.
It’s a bit like McDonalds in many ways. 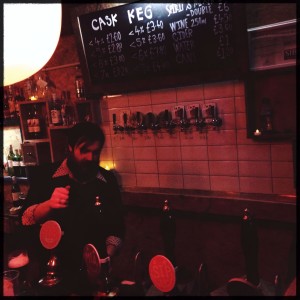 First Chop was very cool.
But so LOUD.

After a couple of false turns we ended up at First Chop Brewing Arm‘s HQ in a vast archway under the railway.
In the front room was a nice little bar boasting cask, keg and bottles and in the back was a stage waiting for live music and a DJ.
I had a half of TEA which was as delightful as it always is and shortly after a young man climbed on to the stage and started playing some decent blues.
The only problem was that the PA was too loud.
Way too loud.
Too loud to the point of distortion and it made my ears hurt.
I know, I have been in bands all my life etc., but it didn’t stop my tinnitus reminding me that I’m not overly keen on big noises anymore.
I’d rather have a chat with a beer.
And so I convinced Chris it was time to go and we caught a cab back to our hotel. 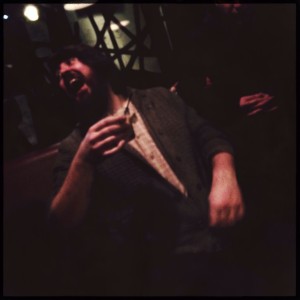 For me this photo of Jay Quantum sums up the whole day in single shot.

And that is about it.
There are at least two other blogs about the event and they give far more detail than mine does.
But what I want to say in closing is this.
At the same time as the Manchester Twissup there was a small Twissup in London.
Both events had nothing to do with me regarding organisation and I think that is brilliant.
As I mentioned in the CAMRGB Report for 2013, I want people to take ownership of CAMRGB and use it for good things.
And they are.
Thanks Connor, you did a marvellous job.
It was the best day out I’ve had in months.

2 Responses to Manchester, So Much To Answer For: A CAMRGB Twissup