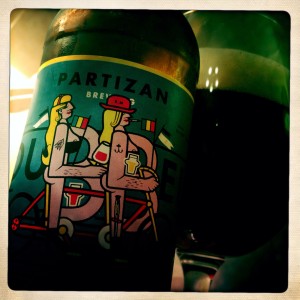 I can’t decide whether this is brilliant or dull.
I really can’t.
And so I’ll just describe it and see how I feel at the end.
The smell of Partizan’s Dubbel is treacle and tobacco.
The malts are treacle too, and more tobacco, rum and raisin, apple cores and walnuts.
Pretty good so far.
But there’s something not quite right.
A weird bitterness, almost sourness to the hops that isn’t particularly appealing.
They’re woody and herbal but they feel damp, as though they’ve been left to fall apart in a damp basement.
OK, I’ve made a decision.
As much as I like Partizan, I don’t like their Dubbel one bit.