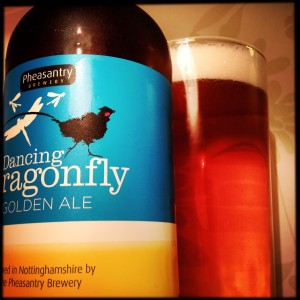 After Gloucester Brewery’s Gold, this is part two in the reprogramming of my faith in Golden Ale.
This time, instead of bags of New World hops, it;s good old fashioned alcohol that makes the difference.
Making this beer a bit more boozy than your usual three-point-something-stretching-to-four Golden Ale ramps up all the flavours and gives this beer a great kick.
The aroma is straw and strawberries and the malts are shortbread and caramel and white pepper, and the hops are bitter pithy hedgerow leaves splashed with lemon juice.
Almost too obvious for words, except the hit of warm alcohol really makes Dancing Dragonfly sing a different tune.
It’s a Golden Ale that little bit better than the others.