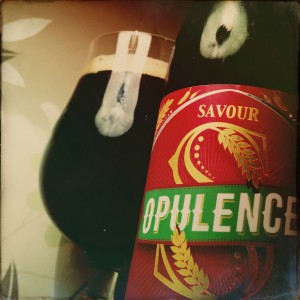 Calling yourself Savour and your beer Opulence is a very dangerous thing.
You’re asking for a fall really, aren’t you?
Actually, this is a decent little beer, but an opulent thing to savour?
Opulence pours a nice deep purple brown and smells of raisins and a hint of honeyed spices.
There’s a sweet fruitiness to the beer that underscores the treacle biscuits of the malts, but there’s a not a great deal more than that other than a light cinnamon and some very subtle hops that only just hint at bitter green herbal leaves, and as I worked my way down the glass an overwhelming apple juice flavour began to take over.
Not bad, but Opulent is pushing it.