Posted on February 2, 2014 by Simon Williams 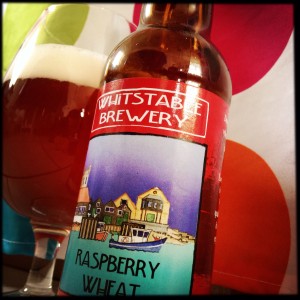 Whitstable Brewery Raspberry Wheat (5.2%)
This is not a bad little wheat beer at all.
It’s a nice red amber colour and its smell is cloves and banana and red berries.
When you take a swig there’s quite a big alcohol hit which I personally don’t mind, but can appreciate may put one or two people off.
Once you get through it you find spicy banana fudge on an oat cake base with the pop and crackle of crisp hops around it.
The raspberries are perhaps a little too subtle for me, you only find them tucked away in the corners, adding a nice gentle fruity bitterness to the finish.
I’d like them a little more in your face, but that’s a small gripe about what is a nice refreshing beer. 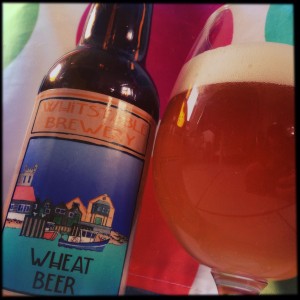 Whitstable Brewery Wheat (5.2%)
Spicy nutmeg and bananas waft up at you as you pour this golden wheat beer, it’s a slightly salty smell, but all the better for it.
I’m guessing that this is the same basic recipe as the Raspberry Wheat as it begins with the same alcohol hit, but then without the raspberries everything is a little rounder, a little softer.
So there’s fudge and cinnamon, brioche and cloves, fried banana and fresh herbal green hops that come through with a good dry kick.
The finish is equally honey sticky and bitter with lemon juice.
Very nice indeed.