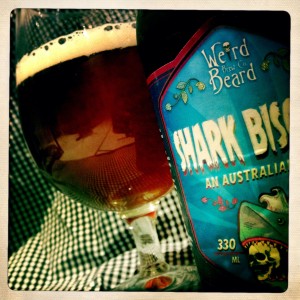 Shark Biscuit is an “Australian IPA” that was originally brewed in collaboration with The Bull in Highgate.
This incarnation has had Carared malt added to give the beer the colour of Ayers Rock.
Ayers Rock is a very long way away from sharks.
Unless they’re on holiday.
Shark biscuit is a stupid beer.
A magnificent beer.
A magnificently stupid beer.
The smell is a billabong full of jelly and rum and fruit cake, and the malts are ridiculously tanned and very drunk biscuits and molasses swimming in varnish and booze.
Fortunately for them the booze isn’t shark infested as the they’re still on holiday at Ayers Rock.
And then there are hops.
They’re as big as the Outback and equally as tongue withering.
Vast swathes of Juicy Fruit chewing gum, mango and lychee, wood pulp, chainsaws, girly flowers, sherbet sweeties, battery acid and billy cans that rip the moisture from your face as you hitch back to the ocean in the trailer of Mr & Mrs Shark.
Stupidly magnificent.