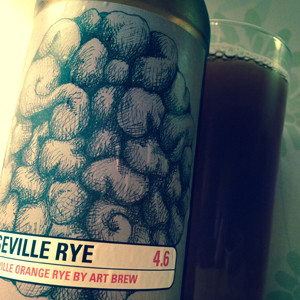 What can I say about this?
Can I even be objective about Art Brew anymore?
If I’m honest, then almost certainly not.
But this is a super beer.
It has a big happy meaty pumpernickel and toffee malt body with plenty of black pepper crackling away in the background, and it has a good bitter lemon hop.
But unlike Art Brew’s Orange IPA where the oranges are very much in your face, here they’re subtle, an extra little surprise in the background, adding juiciness and a zesty zing.
Seville Rye is a really grown up, mature beer where Orange IPA is a shouty excitable teenager of a beer.
But you don’t have to believe me because after all, I’m biased.