Beer? In A Can? In Wetherspoons? 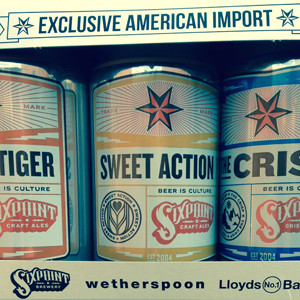 Yes.
Beer in a can in Wetherspoons.
And not just any old beer either.
American “Craft” beer in cans from Sixpoint Brewery of Brooklyn.
I’d not been into a Wetherspoons for at least a year until the morning after the Manchester Twissup a couple of weeks ago when I popped in for breakfast as the hotel prices were a bit, um, pricey.
And while eating my bacon roll I noticed Brewdog’s Punk IPA on sale.
After a bit of Twittering I found out that Punk has been in stock in Wetherspoons for a few months now.
For me this says two things.
Firstly, good on Wetherspoons – and, with all their CAMRA affiliations, good on CAMRA too – for making some changes and bringing this kind of beer into their pubs and secondly, BrewDog have gone where all the big “Punks” went and flooded every corner with their wares.
From a business point of view I get it, of course I do, but as I and many others have said for some time now, they need to drop the Punk attitude thing and just get on with making the great beer they do.
Anyhow, the cans.
They’re good.
Far better than I thought they’d be.
Look. 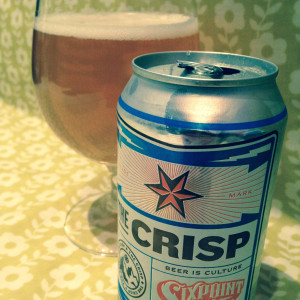 The Crisp (5.4%) is a really decent Lager that pours a bright gold and has a soft spicy apricot and flower border aroma.
It’s a Lager that’s big on flavour, with a good honey and apple skin malt, and a little pepper and burned sugar at its edges.
Over this the hops come on really strong and bolshy with bags of crisp green fresh leaves, hazel, acorns and sappy hedgerow, some lime rind and a sprinkle of sugar.
And all of this builds as you work your way down the glass leaving a spiky clean finish.
Very good indeed. 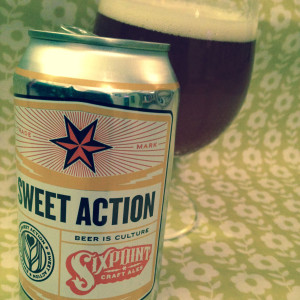 Sweet Action (5.2%) is another great little beer in a can.
If you were to give a beer to someone as a starting point for exploring American Craft brewing, then Sweet Action (terrible name) has everything you’d want to give.
It’s almost a US Craft cliché.
Honey sweet and thick with pine resin, full of grapefruit and sherbet, a little aniseed and lots of fruit jelly.
The aroma is varnished apple crates, straw and toffee, and the finish is sharp and dry and bitter sweet.
Lovely. 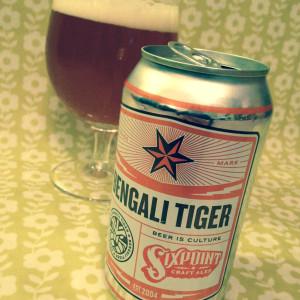 Bengali Tiger (6.4%) is woody and sticky.
Can anything smell sticky?
And I don’t mean in the, “What’s brown and sticky? A stick,” way.
Just form a nosefull you can tell this beer will be sticky.
Bengali Tiger is full of redwood resin, gloopy toffee and fresh rolling tobacco.
There’s apricots and grapefruit too, wood shavings and honey, chard, dandelions and mandarin skins.
All of this means a long and sticky – see, told you – bitter finish to this rather good India Pale Ale.

7 Responses to Beer? In A Can? In Wetherspoons?