1. An activity involving skill in making things by hand

Recently Tesco unveiled a range of beer brewed for them by Marstons under the title “Revisionist”.
Now that’s a really odd word to use.
On the surface, and I’m guessing this is what the marketing men were after, the term simply means rethinking commonly held beliefs.
But the fact is that Revisionism is part Marxist/Socialist theory and a derogatory term used for someone who changes their thinking for divisive reasons, as the Oxford English Dictionary states,

“A policy of revision or modification, especially of Marxism on evolutionary socialist (rather than revolutionary) or pluralist principles.” 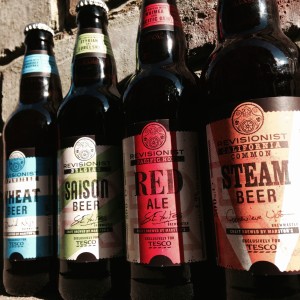 The range of beer is packaged well, and from a distance could be mistaken for a small batch micro brewery.
But when you get up close and personal, and you see the list of ingredients includes Carbon Dioxide above Hops – does this mean there’s more air than hops in the beer? Because usually ingredients are listed from greatest to least on foodstuffs – you have to wonder whether the beer you’re about to drink is going to be anywhere near what a “craft” beer drinker is after, or if it’s just another mass produced drink with the C word attached to it.

Having tried the four beers I could find in the range I’m afraid that I have to disagree with what Marstons say on their website,

We believe that all great beers are born from creativity, passion and not always following the rule book.
We have given our team of brewers free reign [sic] to ‘revise’ beer styles and create their own new interpretations using contemporary ingredients and techniques to deliver memorable drinking experiences.
There are only two guiding principles, fresh thinking and fresh beer.

And why do I disagree?
The beer doesn’t taste “fresh” or provide a “memorable drinking experience”.
In fact all the beer I tried had the background hum of Pedigree to it.
Revising beer styles?
What does that mean exactly?
Certainly what Marstons mean is that they are revising their thinking rather than being revisionist, as that is a very different thing.
I’m not too sure, but a more accurate description of the range might be Bandwagonesque, as coined by Teenage Fanclub whose album’s cover was a big bag of cash.
After all, the word still has that ring of amateur craftiness to it that Marstons seem to be trying to achieve.
Personally I’m not a fan of the term Craft, and each time it gets used as a marketing sledgehammer I like it even less. 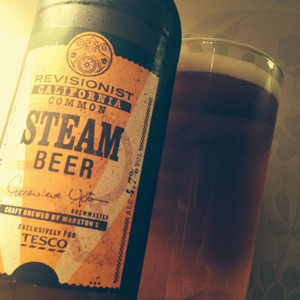 California Common Steam Beer (4.7%) is probably the best of the four, though it’s pretty unremarkable.
There’s barely any aroma to speak of (often that seems to be a mark of hefty filtering and dare I suggest it, pasteurisation?) and as you take a swig you’re greeted by an overly sweet toffee and cornbread malt with burned sugar syrup at the edges and some decent walnut and pear woodiness.
The hops give you a soft spicy herbal thing but it’s pretty fleeting.
And that’s about your lot.
Drinkable in small quantities, but that’s it. 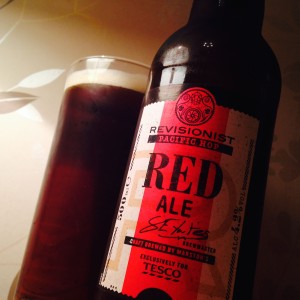 Pacific Hop Red Ale (4.2%) is another beer with barely any aroma.
It pours a decent conker red, but taking a sip you find an almost identical malt flavour as you get from the Steam Beer, with maybe just an added hint of cherries in the background which isn’t altogether unpleasant.
But the Pacific hops that this beer is supposedly brewed with are noticeable by their absence.
I struggled to find anything that I’d expect, with none of the jelly sweets and citrus I’d hope for.
Instead there’s an OK resinous stickiness and a hint of chamomile tea before a weird seaweed (yes, seaweed) slippery finish that’s ever so slightly not right. 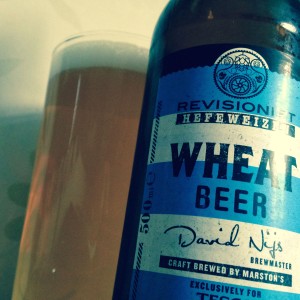 Hefeweizen Wheat Beer (4.8%) has a smell rich in bananas and flowers, but only if you imagine it.
And you need to imagine very hard indeed.
The malting is very thin, watery, bland, with a bit of caramel and a lot of sickly sugary sweetness.
You get the vaguest hint of cloves and then wet, limp hops that try their best to be sharp but wither to nothing after their initial lemon snap.
The finish contains a wholly unappetising chemical aftertaste. 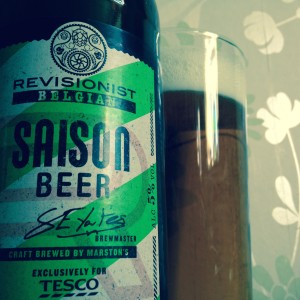 Belgian Saison (5%) contains absolutely nothing resembling a Saison.
Nothing at all.
In fact it tastes rather like a thinned down bottle of Pedigree.
There’s a flaccid caramel sweetness, some pastry crumbs and tired and bored hops that whimper to you about how they could have been contenders.
Instead they’re the feint memory of mown lawns and very little else.
And as with the Hefeweizen there’s a terrible chemical aftertaste that made me pour this beer down the sink.
Very bad indeed.