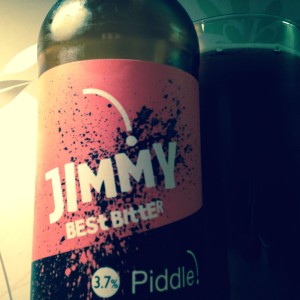 I like this beer quite a lot, though I hate the fact that on the back label it’s called “Jimmy Riddle.”
We all know Piddle is slang for urinating as well as being the name of several small villages in Worcestershire and this one in Dorset (though it’s actually Piddlehinton in this case), so to use another slang term for the name of the beer is taking it a bit far.
And I desperately hope that the brewery’s pump clips doesn’t have the kind of imagery that I fear they do.
Anyhow, this Bitter smells of nutty fruit compote and the malts are digestives and stewed red fruit.
The hops could be a little bigger, but they give just enough nettle tea and lemon rind to add a good sharp bitterness to the finish of this decent session beer.