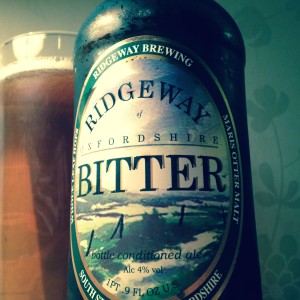 I really like a good Bitter as many of you know, but I can find nothing of any real note in here.
Mind you I’ve had a bit of a mixed relationship with Ridgeway – I’ve found their beer either very good (Bad King John), or very bad (Bad Elf), this is the first that’s just been bland and boring.
There’s no discernible aroma to Oxfordshire Bitter except for a straw and apple thing that’s so weak it’s like sniffing something off in the distance.
The malts are soft to the point of nothingness, toffee and burned brown sugar that, when you finally do catch a taste, is a little too sweet, and the hops – Challenger and Boadicea – simply do nothing more than provide the lightest grassy greenery.
Where’s the nuttiness?
The body?
The Bitter?
Disappointing.