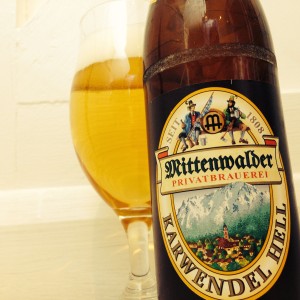 I started with a freshly made burger with chillies and salad and a bottle of Kerwendel Hell (4.9%).
It smells of honey, candy floss and garden flowers and from the first mouthful was surprisingly nutty, along with a good helping of bread dough, shortcake, white pepper and caramel.
There’s a good alcohol sting in here, not a burn so much as a prickle, and over it the hops are peppery rocket and tarragon, lemon rind and hazel leaves tempered by a creamy sweetness that gives way to a big crisp bitterness in the finish. 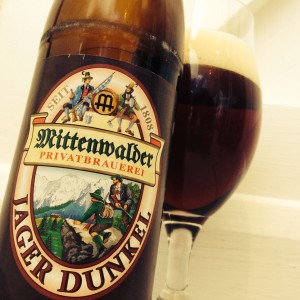 I followed this with a slice of carrot cake and a bottle of Jager Dunkel (5.2%) which is a big malty beast.
It’s full of malt loaf, honey, toffee and apple juice, and it smells of spicy almond toffee.
There’s a good alcohol warmth that really brings out the hefty malting, all chocolate and liquorice and bran flakes.
It’s a round and satisfying beer and it’s topped off with sharp hops that provide a good crunch of leaf litter and bouquet garni before the pithy bitterness of lemon pips in the finish.
And so you’ll be pleased to know that, in this house at least, it’s been a Good Friday.