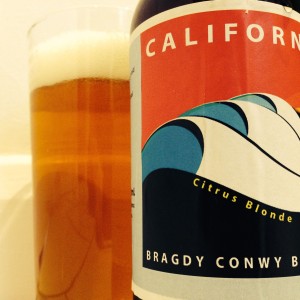 I’m becoming somewhat impressed with this brewery, but sadly it’s because I’ve yet to enjoy a single beer by them.
And I’ve tried a fair few now.
That’s quite a feat, making a whole range of beer that are steadfastly bland and boring.
Take this one.
For all its talk of being, “A modern style Citrus Blonde with American hops,” California tastes almost identical to every other Golden Ale that Conwy have made.
It’s limp and watery with an aroma that’s flaccid damp straw with a hint of honey.
The malting is bland, weak biscuit and toffee over which there should be hops.
But Conwy appear to have not used enough.
You get a whisper of grapefruit, like an apology for what should be, and as I fought my way down the glass I came to the conclusion that maybe Conwy shold be a little less mean with their ingredients.