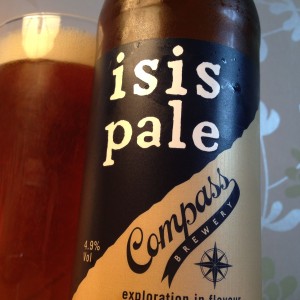 So this is supposed to be, “An exploration in flavour.”
That’s an interesting statement for a beer with very little to explore.
As it goes, Isis Pale is drinkable.
It’s beer after all.
There’s next to no aroma save for some light toffee and the flavour is pretty much beer-by-numbers – malty toffee, biscuits and a lightly spiced bitter citrus thing from the hops.
But considering there’s, “[…]one pair of American and European hops in the boil, then a different pair for dry hopping,” they’re notable only for their lack of bite.
But this is a drinkable session beer, if only because it’s so utterly MOR* it couldn’t possible upset anyone.

*Middle Of The Road