Something Special: The Old Chimneys Brewery 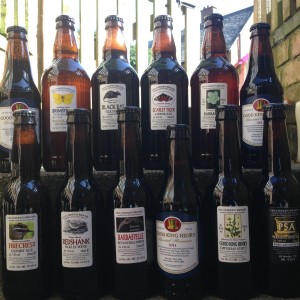 I don’t know about you, but I’d not heard of Old Chimneys Brewery until very recently.
In fact, I’d not heard of them until I got an email a few weeks ago telling me that an online seller that I use would be stocking Old Chimneys beer and that one of their range, Good King Henry Special Reserve, was thought to be Britain’s Best beer as it regularly got the highest votes on RateBeer.
Unless I’m told these things directly I simply don’t know who’s got good votes on various websites or what the latest cool adjunct to a beer is as I don’t read much beer related writing and I certainly don’t use RateBeer.
It’s why I occasionally make mistakes and it’s why I’m the first to admit I am still learning about beer and what it can do.
Maybe that’s wrong, maybe I should be reading every word published so as to be “on top of my game”.
But quite frankly I don’t have the time or the energy.
I’d rather be drinking beer.
Anyhow, Old Chimneys Brewery is based in Diss and has been making beer since Alan Thomson, Master Brewer, established the brewery in 1995 and it has the kind of terrible website that makes me smile.
It’s the kind of website that screams, “I don’t care about all this nonsense. I just want to get on with what I love doing. So here’s lip service paid, can you leave me alone now please?”
I just had to try the beer and ordered a mixed case that included three bottles of the supposedly unbeatable Good King Henry Special Reserve.
When they arrived I immediately fell in love with the packaging, or lack thereof.
Simple sticky labels on each bottle, not even wraparounds, just 2″x1″ stickers with a simple image and the bare minimum of information.
Beautiful.
I couldn’t wait to try them.
This is what I thought. 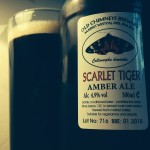 Scarlet Tiger (4.9%)
Old Chimney’s Amber Ale is a lovely malt beauty.
It pours a deep and dark amber and smells of rosewood and treacle.
Taking a swig you get a big sticky toffee fudge sweet stuck to the side of a digestive biscuit, round and chewy and satisfying.
The hops give you a dash of liquorice, some lemon zest and sherbet coated apple cores.
There’s a lovely fruity thing going on too, like opening a tin of prunes and sucking the stones.
The finish is sharp and just bitter enough to cleanse you ready for the next mouthful.
Very nice. 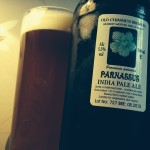 This is a rather good little IPA.
With a big aniseed, pear juice and plasticine smell, Parnassus is a rich amber beer with a good foaming head.
It’s a hop heavy beer, spicy, spiky and sharp.
You get fennel and grass clippings, dandelion and burdock, lemon pips and fizzing sherbet hedgerow foliage.
The malting supports all this with a good Rich Tea biscuit and toffee base, runny honey and bran flakes.
The finish is sweetly sticky but beautifully cut through with a dry bitterness. 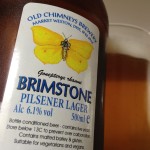 Firstly, let’s get something straight, Brimstone is a very nice beer indeed.
But is it a Pilsner Lager as it claims to be, or is it a beer made with a specific set of ingredients usually found in lagered beer, but brewed like an ale?
What we have here is a very tasty, very drinkable beer with a lovely spiced floral honey aroma, a malt that’s all castor sugar sprinkled shortcake and caramel, all underscored by an alcohol fuelled spicy yeast bite.
The hopping is green and fresh and crisp, loads of hedgerow greenery, lemon rind, dandelions and nettle tea.
A super beer with a lovely crisp finish.
But a Pilsner?
Really? 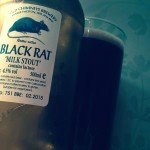 The weakest so far of all the Chimneys’ beer I’ve tried, though this is still very drinkable.
Black Rat is a Milk Stout that smells of chocolate and red fruit and pours a nice deep purple black.
The problem is that everything feels a little bit thin.
There are some lovely chocolate and raisin, digestive biscuit and toast malts and a decent bitterness from the hops.
There’s also a nice sweetness from the lactose.
But nothing hangs around long enough and I want my Stouts to linger.
Good, but not great. 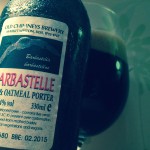 Barbastelle is a Rye and Oatmeal Porter and it’s really rather good.
Pouring a deep brown with a nice cappuccino head, the smell is nothing short of cola bottle sweets.
There’s a load of cola bottles in the flavour too, along with dandelion and burdock, coffee, treacle and a good rye bread meatiness.
You also get blood oranges, rich and sharp, tangy and fresh, they come from a powerful hopping that cuts across Barbastelle, wiping your tongue clean and readying you for the next mouthful. 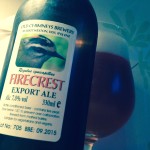 Old Chimneys’ Export Ale is frighteningly drinkable.
It’s smell is all orchard fruit, jelly babies and resinous wood.
Taking a swig you get apple juice and caramel wafers, white rum heat and crushed black pepper, a little bit of mushroom meatiness and some pithy bracken.
There’s also chestnuts, nettle tea, lime leaves, honey and cucumber.
And all of this with a prickly dry bitter finish.
Lovely. 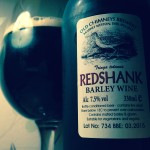 I really like this one too.
It’s far too easy to drink.
But it’s not got many of the things I’d expect from a Barley Wine.
There’s not the almost sickly sweetness, stickiness, apple cores, all that stuff.
Instead, this is more like a frighteningly powerful Bitter, and it’s all the better for it.
The aroma is malty biscuits and red berries, and the flavour follows suit.
Lots of biscuits, plums, coca cola, peaches and a little pear juice, and then a lovely fresh green yet soft and subtle hopping that leads you to a finish that’s refreshingly crisp and bitter sweet.
Very nice. 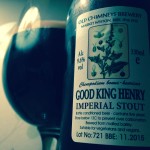 What a lovely beer Good King Henry is.
It pours as black as pitch and feels thick and sumptuous on your tongue.
The aroma is liquorice and plums and all manner of loveliness, and as for the flavours, well what can I say?
Bags of burned wholemeal toast, coffee, treacle, honey and bran flakes.
Lots of crunchy woodland leaf litter, prunes, apple cores, blackberries, aniseed, tobacco and tarragon.
The finish is citrus tinged and bitter yet satisfyingly sticky, honeyed and pudding thick.
This is a wonderful beer. 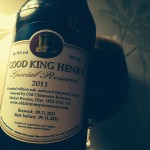 Barrel aged Imperial Stout.
It pours like tar and smells of rum soaked stewed plums.
This is a beer to savour, a big beer, a rich, sensuous boozy animal of a drink.
It’s sticky with treacle and honey, a dab of Marmite, chewed HB pencils and a cup of black coffee.
Then there’s damp old, slightly mushroomy wooden barrels, boozy warmth, dark chocolate and over-ripe plums.
Towards the end you get crunchy red leaf litter and lemon juice that leads to a whisky warm, dry bitter finish.
Lovely. 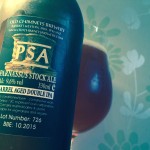 PSA is a barrel aged Double IPA and it’s absolutely divine.
Good King Henry Special Reserve is meant to be great, but it’s not a patch on this.
Pouring a deep amber with a head that’s fun and feisty, the smell is peaches and brandy and the beer pops and crackles on your tongue.
This is big, very big, packed with bruised orchard fruit, maple syrup, digestive biscuits, rum and sultanas.
The hops are sharp and sinewy, lots of resin and hedgerow greenery, dandelion and burdock, lemon juice and sherbet coated jelly sweets.
All of this is magnified by a lovely boozy warmth and a background hum of damp wood and a mushroom fug form the barrel ageing.
I simply love this beer.

One Response to Something Special: The Old Chimneys Brewery