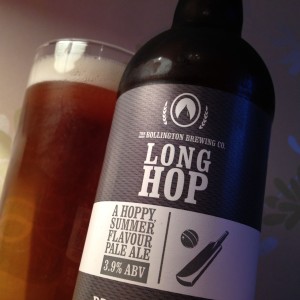 After my initial mouthful of this I thought, “Oh, yet another drinkable but uninspiring beer.”
Then I tool another swig and the hops began to take hold, and you know something?
By the third gulp I’d decided that this is really rather good.
OK, it has that orchards and straw smell, and there’s digestive biscuits and caramel that are a little too much like my old foe, the Golden Ale.
But there’s an intensely bitter hopping that scours the roof of your mouth.
It’s super dry, packed with lemon and grapefruit skins and a heap of elderflower, fizzing with life, it gives Long Hop an amazingly drawn out crisp, bitter finish.
Very nice indeed.