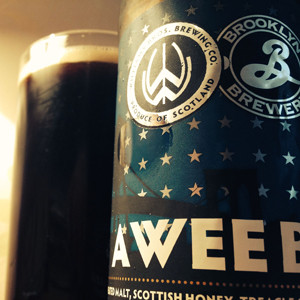 I really wanted this to be good, and it kind of starts off OK, smelling very rich and smoky.
Mind you, that’s about it for the smell.
A not quite real smokiness.
As you take a swig you get a massive hit of the same, a bit of treacle, and some bran flakes.
There’s the merest trace of hops that simply ad an apology for the lack of real bitterness, and then there’s this weird fake tasting chemical thing that moves right in on you in the finish and leaves you with an odd sticky smoky bacon crisp flavouring feeling.
Now I like a good Rauchbier, I like smoked beer of all kinds, but this just isn’t very nice.