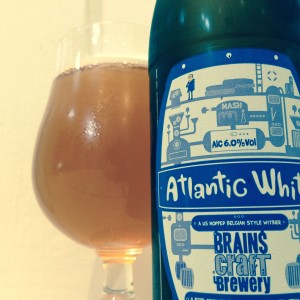 This ought to be a tasty little beer.
Ought to be.
But yet again I’m let down by Brains.
Atlantic White – a beer that, “Blends the tradition of Belgian Wit beers and the hop character of American IPA’s to produce a White IPA” – is flaccid and wimpy and really very boring.
Firstly, this bottle poured almost completely flat, looks murky in my glass, and smells of very little save for the merest caramel and vanilla.
Secondly, taking a drink I’m struggling to find any real flavour highlights from under the beer’s alcohol burn.
It scours your tongue, allowing only the least trace of toffee and pineapple to find their way through, and if there’s one thing I don’t fancy it’s toffee coated pineapple.
The finish is floppy and limp, leaving you with a taste on your tongue that you’ll remember from when you tried chewing grass at school.