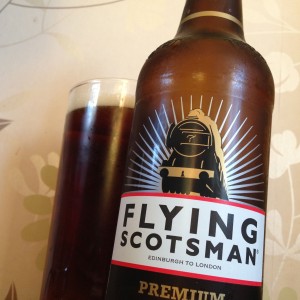 This isn’t a bad Best Bitter, I’d just like everything to be a bit bigger.
The aroma is spiced apple and chocolate, but smelled from another room.
The malting is Eccles cake and treacle toffee pudding remembered from yesterday, and the hops are peppery and spiky heather and bracken, but viewed across a rain soaked highland glen.
Everything is a little bit faded, ever so slightly thin.
Flying Scotsman has some terrific flavours, but they don’t hang around quite long enough to make this the brilliant beer that it’s trying to be.
However, they are definitely big enough to make this a very drinkable session Bitter.