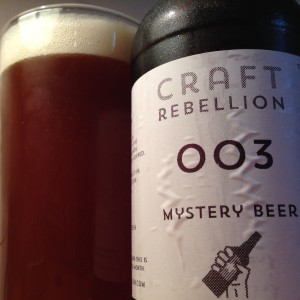 I love this Mystery Beer idea.
It’s great fun.
For those of you unfamiliar, Craft Rebellion send you an unlabelled bottle of beer with every order of a dozen bottles or more and you try and guess what it is before it’s announced at the end of the month.
I got pretty close with 002, guessing the brewery but not quite nailing the brew.
However, I’m really stuck trying to guess this one.
It’s a big IPA that pours a deep orange and smells of mandarins and varnished peaches.
There’s a cracking malt that’s thick with toffee coated pretzel pieces, thick honey and toast crumbs.
And then there’s the enormous sherbet fizz of a seville orange, mandarin and grapefruit hopping that bursts on your tongue and builds with pine resin, redwood bark and lime zest.
The finish is zingy, crisp and very bitter.
But what is it?
It might be Chimera, though it’s such a long time since I had it that I’d not put money on it.
Whatever it is, it’s very good indeed.