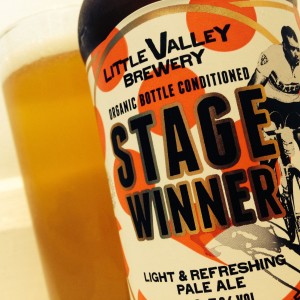 I have never had a Little Valley beer that I’ve really liked, and Stage Winner doesn’t change that at all.
Like Conwy Brewery, I find everything they do to be watery, bland, almost flavour free.
The smell of this beer, oddly, is Sugar Puffs – Sugary, honey wiped puffed riced – and in its own insipid way, Stage Winner is quite refreshing.
That is, in the way a pint of water is quite refreshing, as there’s next to nothing to write about here.
The limpest, dreary biscuit malt and the meanest use of hops you can imagine.
In fact, I’ll put it like this.
Once upon a time a friend told me how she’s cooked a meal.
It was her first dinner party and she followed a recipe but didn’t know the difference between a clove of garlic and a bulb.
The recipe called for two cloves and my friend used two bulbs.
The hops in Stage Winner are the exact polar opposite of that.
Nice spotty label though.