Believe it or not, but sometimes I find these reviews difficult to write.
Especially when I have been sent something direct from a brewer who wants my opinion. Malmesbury is a case in point.
Based in Wiltshire they do a range of “traditional” beers – the ones of which I have tried have been rather nice – and have recently started producing more “modern” styles with the range name of Killer Cat.
And this is the problem.
Grateful as I am for being able to try these new beers, none of the three that I’ve been sent are very good.
Actually that’s an understatement, look. 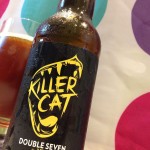 A double IPA with an almost undrinkable alcohol burn that cuts at your tongue and brings with it a weird and very unpleasant surgical/chemical/medicinal flavour that I can’t quite put my finger on but is absolutely awful.
Any malt or hops presence is totally killed off by it and left me feeling as though I just drunk a badly made alcopop. 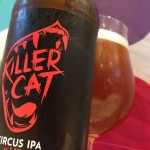 More weird chemical flavours, though not nearly as harsh as the Double Seven, they still take over this drink and mask any hop and malt presence save for the merest lick of toffee.
It’s a real pity as there’s a decent enough aroma to Circus IPA, a gently sweet peachy grapefruit.
But even the long finish feels strangely fake as it curls your tongue up. 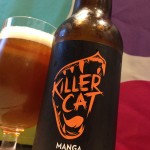 More alcohol burn.
The aroma of Manga is those little yellow bricks you find in pub urinals.
Where there should be malts and hops there’s yet more of this chemical tang that slices away at your palate like the enemy of beer.
All wrong.

Further to this, these are the first beers I’ve had in a long time that have given me a headache while drinking them.
Are there additives here?
Is there some chemical process to the filtering that’s doing all this?
If you see Malmesbury’s regular range of beer in a pub then please buy it and try it as it’s good honest fare.
But stay away from the Killer Cats.