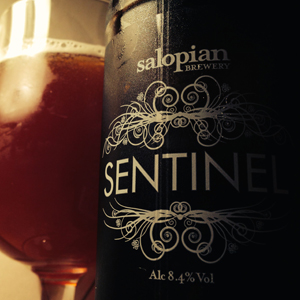 Everybody gets something wrong sometimes.
Even the people we love make mistakes.
We note them and move on, remembering why we love them.
I love Salopian Brewery.
I love their range and their style, and I really love the new beer they are making.
But Sentinel (brewed in collaboration with Celt Experience Brewery), at least the two bottles I have tried, haven’t worked.
They’ve both been flat and heavy with diacetyl.
Perhaps the yeast is struggling under the weight of alcohol as happened with one of the Down Deeper beers that Arbor Ales did a year or two back.
Perhaps the bottles were released much too early.
Mind you after opening the first, I left the second in a warm place to condition for a fortnight but with no noticeable improvement.
And so this is a review of a beer that should have been, that might have been.
But I still love Salopian and so with a sigh I move on.