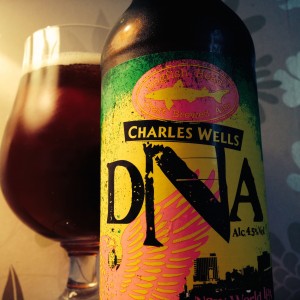 This is an, “Anglo American mashup-up of a Wells classic and a reduction of Dogfish Head’s 60 Minute IPA.”
That’s what the label tells me.
What DNA is in reality is a very pour excuse for a beer.
It’s a sickly caramel forward beer with a smell that’s somewhere between jelly sweets (nice) and bile (not nice), like someone’s thrown up at a child’s birthday party.
There are some OK fruity flavours – citrus, herbs, a hint of woody resin – but they’re watery and flat and feel like they’ve had all the life sucked out of them.
Considering how hard it is to get hold of Dogfish Head beer in the UK, this is a very poor excuse for a replacement.
Oh, and what is, “[…] a reduction of Dogfish Head’s 60 Minute IPA” anyway?