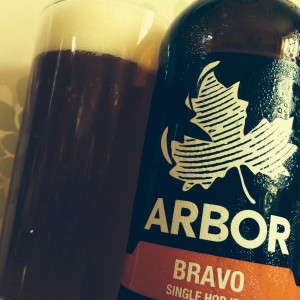 Bravo is a new hop on me (at least my old fuddled brain doesn’t recall it’s name), so it’s interesting to have it presented by itself, this being a single hopped IPA.
The aroma is stingingly sharp lemon juice and a touch of battery acid, and the beer slouches in my glass looking self assured and ready for a fight with it’s orange complexion and big fluffy cloud for a a head.
The body of Bravo is surprisingly soft and chewy.
It’s a caramel shortcake delight, gentle and warmed by alcohol.
not huge but big enough to create a good backbone for the hops.
And the hops are harsh.
Harsh in a good way.
Bravo is a hop for the hardened Hop Head.
Knife sharp, they’re lip puckeringly bitter, dry and crisp.
Lots of lemon and satsuma skins, a dab of orange marmalade and a shed load of fresh green grass that leads to a finish so long and crisp it’s like touching your tongue to a Triple A.
Very good indeed.