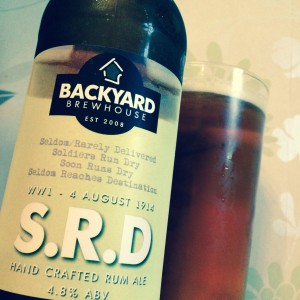 I can’t decide whether I like this or not.
There’s something about it that reminds me of Innis & Gunn, and I don’t really like Innis & Gunn.
Maybe it’s the addition of rum to the brew that does it.
Yes that’ll be it.
SRD is a beer that’s had rum added at the conditioning stage, not that there’s a big bold rum presence, it’s more a mild boozy warmth and a Demerara sweetness that sticks to the inside of my mouth á la the aforementioned I&G and starts to feel a little bit sickly as I work my way towards the bottom of my glass.
The malts are biscuits and honey and a tiny prickle of ginger, and the hops are sharp nettle stings ad pithy hedgerow greenery, nice in and of themselves, they’re not helped much by the rum addition.
I’ve decided I don’t mind it, but I won’t be rushing to try it again.