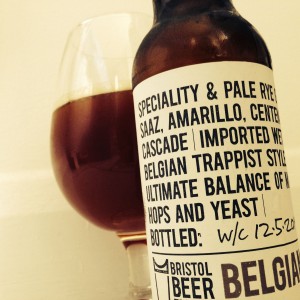 The ingredients of this beer, printed in big bold letters all over the label, reads as though is should be spectacular, but sadly it’s little more than average.
Bristol Beer Factory’s Belgian Rye has a boozy fruit and flowerbed aroma and sits a slightly murky bronze in my glass.
Brewed with, “imported wet Belgian Trappist style yeast,” rye and a bunch of hops, the flavour is far from the, “ultimate balance of malt and hops and yeast.”
For a start there’s an alcohol burn that borders on the nasty.
Under it you can vaguely make out that earthy liquorice body that a Trappist style yeast (and why is it Trappist style yeast? That’s a weird description, no?) might give.
Think Rochefort 6 and divide it by three.
Got it?
About like that.
There’s some toffee and a little meaty pumpernickel from the malts along with green herbal leaves, mandarins and lemongrass fro the hops, but there’s also a slightly unpleasant aftertaste that I can’t quite put my finger on, bordering on sour and acidic it scrapes away any of the sweet roundness that might otherwise have built this into a decent enough little beer.
Belgian Rye is not a terrible beer, and liking this brewery as much as I do, maybe I was just hoping for too much from this bottle.
But then it doesn’t half shout about how good it thinks it is.
Underwhelming.