Can The Can? Yes It Can: More From Fourpure 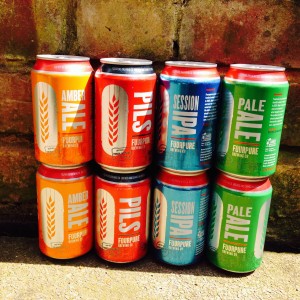 Beer in a can.
Until reasonably recently canned beer has reminded me of terrible house parties and the odd sneaky drink on a park bench.
Beer in a can has been at worst terrible and at best average.
But things have changed, and I know that many of you know that already, but I think it warrants saying out loud.
Over the last twelve months or so I have slowly been converted to canned beer.
It started badly actually, a four pack of BrewDog’s IPA – right in the middle of my Punk IPA downer – which I was wholly unimpressed with.
But then I got hold of some American “Craft” cans including my old favourite, Sierra Nevada’s Torpedo, and everything changed.
And so it was with no little excitement that I heard the news that one or two of our British brewers were to be canning their beer, most recently Fourpure, a brewery who have been covered on more than one occasion by this blog and who I admire very much for their style, their business practice and, well, their beer. 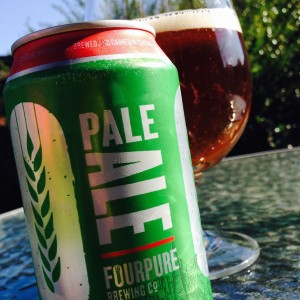 So what can I say about Fourpure in a can?
Firstly it looks great, the branding sits really well on the stubby little tins and the range looks fresh and cool.
And fresh is the operative word in all this.
As I opened a can of Fourpure’s Pale Ale I was greeted by the most lovely fresh aroma, all juicy floral hops and succulent malts, so much so that once the beer was in my glass I reached for the can and stuck my nose in to collect as much of that aroma as I could.
I had the same experience with all the cans that I tried (the Session IPA, the Pils, the the Amber Ale) – They’re crisp, flavourful and overall, fresh as a daisy.
In the medium term I foresee beer presented like this being hard to sell to the old guard and predict a bit of a knee-jerk reaction in some quarters as the perceived lines of demarkation between good/Real beer and watery Lager badness on supermarket shelves is between the bottle and the can.
I say that as someone who felt exactly that way until I had my eyes opened.
But I wholeheartedly welcome this new method of dispense (for want of a better term) as it does nothing but present well made beer in a wonderful way.
I am a convert.

3 Responses to Can The Can? Yes It Can: More From Fourpure