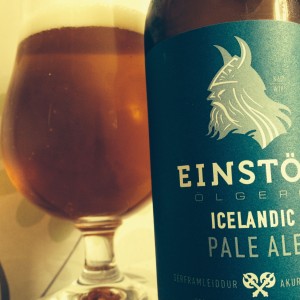 I’m surprised at just how malty this beer is.
It’s got a lightly spiced toffee apple aroma and there’s lots of sharp spiky hops whizzing around in it.
They’re all pithy sapling wood, greengages and nettle tea and they, initially at least, provide a very nice snap on your tongue.
But slowly the thick gooey toffee of the malting begins to take over, gluing itself to the inside of my face and cushioning me from all the hop action.
And I don’t want to be cushioned, I want to face the hop action thank you very much.
Not that this is a bad beer.
Not by any means.
Einstök’s Pale Ale is very nice indeed, but it ain’t half sticky.