A few weeks ago I came across Hop Stuff Brewery and thought I’d check them out.
I was drawn in by their logo as I’m an Arsenal supporter (so shoot me) and their logo looks rather like my favourite club’s badge.
My interest may have stopped there, other than a few reviews of the brewery’s beer, had I not been treated fantastically well by them when I had a bad experience with my first order.
You see, Hop Stuff saw my tweets about my mixed case not being as mixed as I’d have liked and some trouble I’d had with the bottles that arrived, and contacted me straight away to offer their help and to make sure I got their product in the best condition possible.
That level of customer service warmed me to them no end and made me want to have a quick chat with them, and so I emailed a few questions and this is what happened. 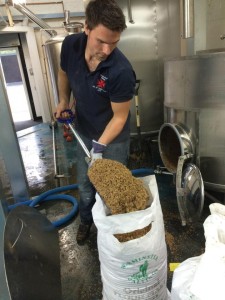 Hello. Please introduce yourselves.
I’m James Yeomans, Owner/Founder/Dogsbody/Brewer at HSB.
I used to work in the city, working in debt capital markets, which was a painful and unfulfilled part of my life.
I’m originally from Rutland and went to university in Exeter – drinking plenty of Doombar (when it was Doombar!).

Have you always been in the beer industry or did you begin somewhere else?
Yes, my dad used to own pubs in the west country so there has always been a connection with pubs/beer/brewing.
My interest started when I was in Exeter, lager was awful and we started drinking real ale, that’s when I started to discover different varieties of beer.
When I moved to London the craft beer scene was just starting, with Kernel and Redemption opening in 2010.
After that, I drank far too much good beer and started to love it! 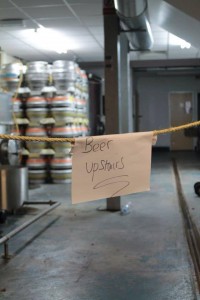 Why base yourselves at Woolwich Arsenal?
We live on the Royal Arsenal, and it was once we moved here that we finally had the confidence to start the brewery.
It’s a wonderful and diverse part of London, steeped in history and the area is really gathering pace with a revival.
We saw the opportunity in the redevelopment of the Arsenal and surrounding area, after that we thought we had to do it.
Also, London is fairly crowded with breweries now, our little corner isn’t – besides Meantime, there are no “micro’s” around!

What kit do you use?
We brew on a 10bbl kit we got from John at Oban Ales – currently running 2 FV’s (full with Arsenal Pale Ale and Pale Ale at the moment).
However this is increasing to 3 soon.
The third is a 20 bbl FV though so we can double brew into it! 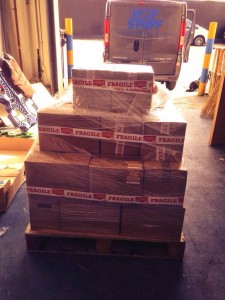 Any plans for the future? Where do you want to take the brewery?
To continue growing at a strong and steady pace for the next year or so.
We’re crowd-funded so we owe it to the investors to make the growth sustainable.
We’re hoping to add a couple of new guys to the team (a new brewer and a sales manager) in the not too distant future and would like to be up to brewing five times a week within eighteen months.
We will benefit from the opening of some new pubs in the local area, as well as continuing to grow in central London and further afield.

This is what I thought of the beer. 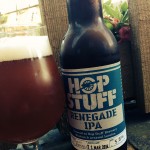 Renegade IPA (5.6%)
Big and bitter and fruity, Renegade is a super little IPA.
It pours with a big frothy head, lounges in my glass with a very appetising deep amber hue, and smells of tropical fruit sweeties.
The malting is toffee and popcorn, Garibaldi biscuits and white pepper, and there’s peach juice sloshing around too.
As for the hops, Renegade has buckets full.
Lots of mango and kiwi, lemon, lime and mandarin, fizzy sherbet flying saucers and penny sweets jump around in here too, making for a long and deliciously bitter finish. 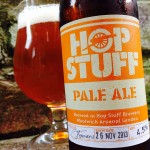 Pale Ale (4.5%)
With a smell that’s all spicy honey, straw and flowers, this little bottle of amber coloured beer is a very nice, wonderfully simple addition to Hop Stuff’s range.
The malts give you plenty of crunchy biscuit, puff pastry, toffee, white pepper and apricots, and the hops are sharp and green, hazelnuts, lemon pith, rosehip tea and nettle stings.
And with a finish that’s long, crisp and dry, this is a beer to drink in pints. 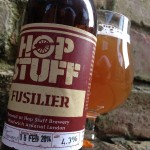 Fusilier (4.3%)
For me the weakest of the Hop Stuff range, Fusilier is still a very drinkable malty Brown Ale (Though it’s not particularly brown).
The smell is earthy, toasty biscuits and the malting is big and bold, full of nuts and brown bread, honey and toffee.
It’s a gloopy chewy beer, but saved from being cloying by a short sharp hit of fresh blackberry leaf tea hops that add a much needed bitter edge to this decent little session beer. 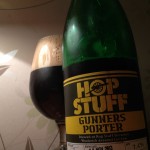 Gunners Porter (7.4%)
750ml of dark rich beauty.
That’s all you need to know really.
Gunners Porter is packed with Chocolate malt, Willamette and Pilgrim hops, and pours a deep purple brown with a big fluffy cloud for a head.
The smell is chocolate coated prunes, and taking a swig the initial flavours follow suit.
Lots of chocolate, toasted brown bread, honey, damsons, peaches and plums, and a big cup of coffee.
The hops are spiky and crisp, with lots of crunchy leaves, grass clippings, a sprig of basil and a good twist of lemon juice over a resinous maple syrup stickiness.
All this is amplified by an underlying alcohol warmth that makes for a lovely long sticky finish. 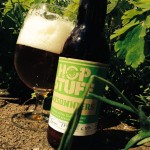 Saisonniers (4.5%)
This is an absolute delight, though it may be one of those Marmite beers for some.
Brewed with fresh Rosemary and Thyme, the beer pours a warm gold with a big billowing head and a super fresh garden aroma.
The malting is sticky honey and crusty baguette, the Belgian yeast adding its own bread dough warmth along with a gently sour hum.
Over this the hops are spiky and bitter, lime leaves, apricots, grapefruit and dandelions.
But it’s the addition of the herbs that really make Saisonniers something a bit special with their dense woody resinous bite and their pin sharp herbal freshness, they add the most lovely meatiness to what is already a terrific beer.

Source: EeBria
Thanks to James and the gang at Hop Stuff for their time and help.

3 Responses to Hop Stuff Brewery: An Arsenal Of Beer