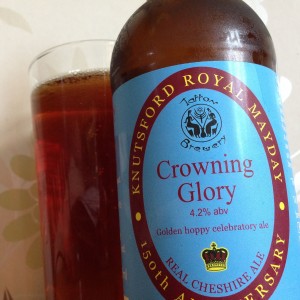 Brewed to celebrate the 150th anniversary of Knutsford’s Royal Mayday, this is a perfectly drinkable pint.
Mind you, it calls itself a Golden Ale.
Actually a Golden Hoppy Celebratory Ale.
What Crowning Glory is is a biscuit based malt rich beer with an apple and pepper smell, toffee and apple juice body and a decent woody background hum.
It’s a beer with a peppery rocket leaves from its hops, a twist of lemon and a glug of elderflower water.
It’s an alright beer, if nothing good enough to really celebrate.