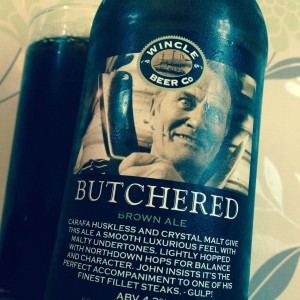 I do like Wincle beer and this, their Brown Ale, that flavour wise borders on a Porter, is very nice indeed.
It pours a mahogany brown and smells of roast nuts and red fruit.
There’s treacle, toast, and rum and raisin chocolate from the malts, and a big hit of orchard greenery from the hops.
Apple cores and elderflower, nettles, blackberry leaf tea and just a hint of liquorice.
The finish is nutty, sticky – that’s like glue rather than like a stick – and lightly bitter.
Oh, and I love the label too.