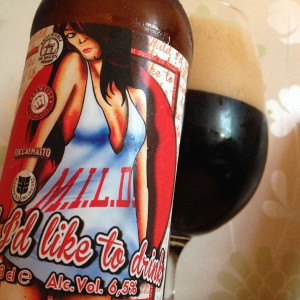 Mild I’d Like To Drink.
That’s a good name.
And this is a good beer.
It’s a four way collaboration between De Molen, Brewfist, Toccalmatto and Birrificio Del Ducato, and it sits in my glass a deep dark leathery brown and smells of chocolate and toast.
And that’s kind of how it tastes, except it’s more than the sum of its parts.
This is a Mild that has no idea how to be mild.
It’s a stupidly big drunken damson, black coffee and treacle, rum and raisin, staggering-home-after-too-many-Milds kind of a beer.
It’s silly, ridiculous, brilliant.
There’s a lovely red leafiness from the hops, all garden litter and chestnuts, splashed with lemon juice and doused in whisky that leaves a super dry, sticky mess on your tongue that you don’t want to stop.
My only problem is the scantily clad girl on the label, but I’m guessing (and hoping) that that is a cynical play on the old fashioned 70’s brained misogynist pump clips of the Mild In May brigade.