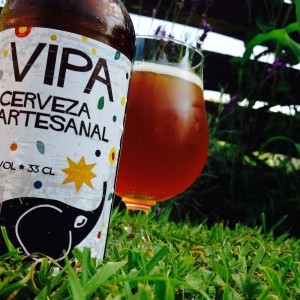 So, my first time trying one of the newer wave of beers coming out of Spain, and so far so good.
VIPA is Tyris’ take on an English IPA and it pours the right colour.
It’s a warm glowing amber, and the smell is honey, oranges and flowerbeds.
The malts are full of biscuit and pastry and some crackling toffee that’s been burned around tis edges.
Initially big and round and chewy, the flavour drifts off into a lightness, almost a watery feeling though in a thirst quenching way rather than a bland where’d-the-flavour-go feeling.
The hops are marmalade and lychee, lime leaves and grass clippings, sharp and bitter they could perhaps do with being a little more hard hitting.
VIPA is a beer that doesn’t feel anywhere near its ABV and leaves you with a crisp, dry finish.
Very good.