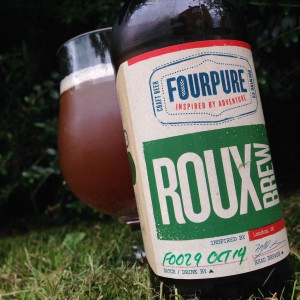 Brewed with orange and grapefruit zest and coriander seed, this beer won the inaugural Roux Brew competition.
Bottle conditioned and poured really badly by me, the beer sits a murky copper in my glass.
The aroma is spicy treacle tart, and that’s where the flavours begin.
Well baked pastry, toffee, pecans and brown sugar, spiky black pepper and some snappy herbal greenery from the hops.
The orange and grapefruit zest add a zippy fresh piquancy to the edges of this beer, never taking over, just building an extra layer that’s backed up by the light waft of coriander that drifts across the very good bitter, dry finish.