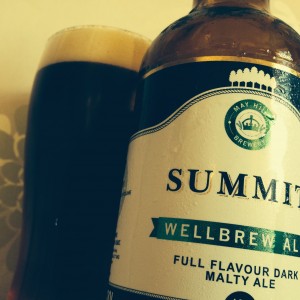 Not a beer brewed with Summit as the name might suggest, this Dark Ale pours a chestnut brown with a creamy off white head and smells of Weetabix and vanilla.
This is a malty beer with lots of digestive biscuits, wheatgerm and bread crusts, honey and pear juice.
There are hops here too, though they don’t have an awful lot of punch.
Lemon juice drizzled over hawthorns, and blackberry leaf tea with a hint of aniseed in the background.
Not the most exciting beer I’ve ever had, but pretty decent nonetheless.