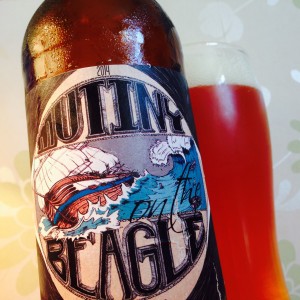 Just over a week ago there was a Twitter event held by Natural Selection Brewing which saw a bunch of people trying this beer and comparing notes.
Sadly my bottle didn’t turn up until I had already left for a week’s holiday – I had intended to take it with me – and so I had to open and drink it all alone last night.
This is what I thought.

This is a really good bottle of beer.
Even it’s label – which interestingly says brewed at Stewart Brewery on the back – is good.
It pours a bright gold with a big frothy head and smells of peaches and lemon curd hidden in a sideboard.
The malting is wholemeal bread crusts and honey, and there’s some peach melba and vanilla wafting around too.
And then the hops throw buckets of pine resin and satsumas, marmalade, pencil shavings and lime zest at you that leads into a finish that is super sharp, dry, bitter and crisp.
Very nice.