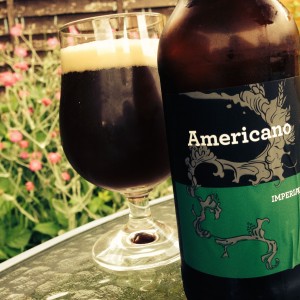 So, an Imperial Coffee IPA.
That’s a recipe that could go one of two ways, right?
In this case it’s gone entirely the right way and Americano is an absolute brute of a beer.
It’s a madman, big and bolshy and a little bit frightening.
After all, Americano is a bastardised Mild or a Black-ish Imperial IPA with a shed load of hops – Citra, Columbus, Cascade, Chinook, Mosaic and Comet – indiscriminately mixed with dark malts and a sack full of coffee beans.
The hop kick is wicked, slapping you square between the eyes with ultra sharp citrus and sticky pine resin, lavender and aniseed balls, and the malting is all smooth chocolate spread on burned toast.
The heaviness of the alcohol bangs away at your senses, but just as you start to slouch the coffee takes effect and you (well, I at least) become a half-pissed wild man with enough wired energy to take me through the night with the vague hope that I’ll come up smiling in the morning.
Brilliant beer.