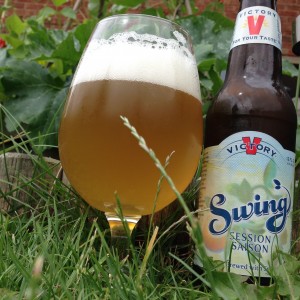 Up until now I’ve not found fault with any Victory beer that I’ve tried, and in fact for a long time their HopDevil was a firm favourite (and still would be if I could get hold of it).
However, Swing – Victory’s Session Saison – is a harsh soapy Eau De Washing Up Liquid horror.
It begins with a you’d-guess-it-was-flavourings-if-you-didn’t-know-better lemon aroma and then sets your teeth on edge as you take a mouthful.
Very harsh, acidic, soapy and lathery on your tongue, it’s incredibly difficult to make out anything else that might be going on in here under the weight of the washing liquid monstrosity.
I guess every brewery has to make one bad beer.